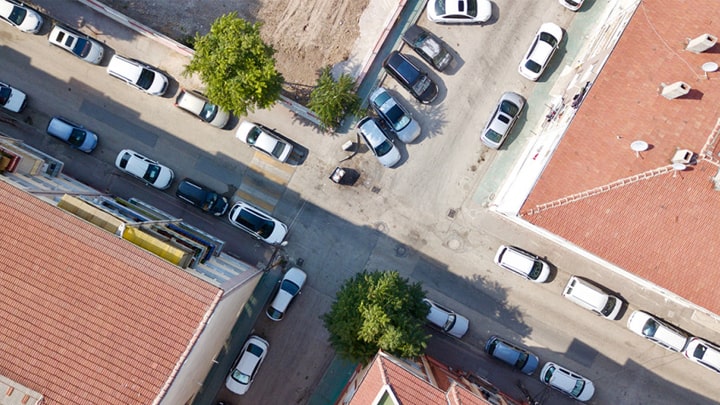 Autonomous vehicles need precise, reliable positioning at all times. That’s an issue in urban areas, where buildings can block signals from navigation satellites.

Signal reception is one of the big technological challenges of the modern age. Today, it’s mostly thought of as a telecoms issue. If someone complains that their smartphone has ‘lost reception’, they’re most likely referring to a loss of cellular signal. And the chances are it’s because they’re in a rural location, far from any transmitter.

But now, a new type of signal reception issue is looming. It doesn’t affect rural locations but built-up areas, where buildings obscure large portions of the sky. And the signals in question aren’t 4G or 5G, but GNSS – global navigation satellite systems like GPS, Galileo, GLONASS and BeiDou.

Buildings can cause GNSS performance variations

GNSS signals operate best on a line-of-sight basis. Any device that uses them to calculate an accurate position must have direct sight of at least four satellites – and the more, the better.

That can be an issue in areas with a narrow view of the sky. GNSS signals are only as powerful as a 40-watt lightbulb by the time they reach the Earth, so they’re often unable to penetrate buildings. And as orbiting satellites are in constant motion, their signals continuously pass in and out of view, making it hard to know in advance where and when GNSS will be reliable.

That’s annoying if you’re in an unfamiliar city and your smartphone or vehicle briefly experiences poor GNSS signal reception, but it’s not usually a deal-breaker. For drones and self-driving cars, though, it’s a different matter. If they’re to operate safely on and above our city streets, they need to know precisely where they are at all times.

It’s a challenge that GNSS technologists have been working on for many years, with increasing success. Before 2011, the only fully functional and commercially available GNSS was GPS, and its constellation of just 24 satellites meant that signal reception in built-up areas was often degraded, resulting in poor availability and performance.

Chipset developers swiftly launched new multi-GNSS receivers, capable of processing signals from GPS and one or more of these new systems. With many more satellites orbiting the Earth, a multi-GNSS receiver has a much greater chance of having line of sight to four or more – even in built-up areas with a narrow view of the sky.

But even though multi-constellation GNSS receivers greatly improved signal reception in urban and suburban environments, there are still areas where sometimes not enough satellites are in view to calculate an accurate position.

RTK increases precision, but more is needed in GNSS-degraded locations

An often-mooted solution is RTK, or Real-Time Kinematics. Its ground-based stations measure the localized atmospheric delays of GNSS signals and transmit corrections to GNSS receivers to mitigate the delay, creating a GNSS positioning solution with centimeter-level accuracy.

In terms of precise positioning, RTK is a powerful GNSS augmentation technique. But to achieve that precision, it too must have line of sight to four or more GNSS satellites. So while it works well in many areas, it doesn’t solve the issue of availability in urban settings.

The ‘last mile’ of urban positioning: knowing where and when GNSS will be reliable

It’s a ‘last mile’ kind of problem. Today’s GNSS receivers are capable of navigating safely and accurately in just about any situation. They’re put through their paces in advanced test labs, giving developers and users a detailed understanding of the signal conditions the receiver can operate under.

What lab testing can’t do, though, is pinpoint the spots where and when those conditions are likely to deteriorate to the point where the signal may no longer be reliable. Even more importantly, perhaps, it can’t show the times and places where your GNSS equipment can be relied upon for a high level of precision with a high level of certainty.

That would require a map of some kind – but given the constantly-changing nature of GNSS signal patterns, a street corner that has poor GNSS reception at 3pm may be perfectly navigable again just ten minutes later. A static map would therefore be inaccurate and misleading. What’s needed is a dynamic map that accurately forecasts changing patterns along alternative routes, giving the vehicle or its operator the situational awareness to decide which to take.

For unmanned aircraft (drones), such a map would also need to consider altitude. The higher the drone flies, the more likely it is to have line of sight to four or more satellites, greatly reducing the problem of signal loss. But that means trade-offs in terms of energy consumption and how much the drone is able to carry. Higher altitudes may also be reserved for other airspace users, like air-taxis and manned aircraft.

Realistically, drones for uses like package delivery and emergency response will need to be able to take off, fly at a relatively low altitude, and land, all in an urban setting – so understanding and anticipating signal reception issues at different altitudes will be essential.

Talk to us about forecast assured GNSS performance

For 30 years, Spirent has been helping organizations around the world to design and test sophisticated GNSS receivers that address almost all of the accuracy and reliability issues associated with satellite-based positioning, navigation and timing (PNT).

As we move towards a world where vehicles are truly autonomous, we believe that assuring GNSS performance in built-up areas is one of the last big PNT issues to address. And it’s an issue that, if left unsolved, could block the path to regulatory approval and certification for self-driving ground vehicles and drones that operate beyond visual line of sight.

We welcome discussions with industry about the scale of the issue, and the potential solutions Spirent can offer. You can get in touch with us here.